As an international business consultant, I spend about half of my life on the road. When I’m at home, I’m lucky enough to live on a small farm, where we keep a commercial flock of organic ewes. It is a good combination for me – being a consultant gives me intellectual stimulation, while the slower pace and natural rhythm of farming give me the time to reflect and think of new approaches to my consultancy work.

As a consultant, people often ask me about life on the farm. I think that what has surprised me the most, over the five years that I have been a shepherd, is the astonishing variety of vocal calls which sheep and goats make. What has not surprised me is the sheer hard work and joy involved, during the lambing season, in bringing new life into the world. It is difficult, for even the most hard-hearted of the visitors to our farm, to resist the charms of a new-born lamb or kid goat. This well-known phenomenon has been exploited by charities for decades – when coupled with a convincing story, it is a very effective fundraiser. 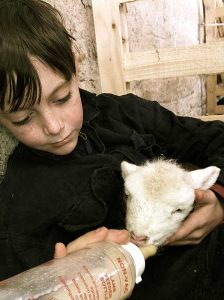 Before you read on, I would like to make it clear that I have a lot of time for the charity ActionAid (I, myself, spent 14 years as a volunteer director of a charity, with the last six as chairman of its board, so I am choosy about my charities). ActionAid runs a campaign where it attempts to persuade you to buy a goat to be gifted to a developing-world family. The idea is that the nanny goat will provide milk to sustain the family, will drop dung to fertilise the ground and will bear kid goats which can be sold to provide an income. It is a narrative which effectively exploits our cognitive biases (more on cognitive biases here). There are at least three of the big ones involved in the buy-a-goat example: the ‘power of storytelling’ bias (where stories are more easily remembered), the ‘belief’ bias (where the apparent logical strength of an argument is biased by the believability of the conclusion) and the ‘Von Restorff’ effect (causing you to remember items which stick out more than others – a living goat over another food parcel or a pack of essential toiletries, for instance).

These three cognitive biases are part of a family known as the pattern-recognition biases. (To keep the 150+ cognitive biases in some form of manageable model, when measuring them, our reports break them into five categories. You can see a sample cognitive bias report here.) As a leader, I consider it to be vital that you understand your cognitive biases and how to counteract them, in order to make effective decisions consistently.

One of the simpler ways to mitigate the lure of your cognitive biases is to train yourself to look for counter arguments. Here are a few: a goat might not be the best thing to foist on a struggling family, who may have no experience of keeping livestock (I did a six-month shepherding course at the local agricultural college… and I needed it). There are parts of the developing world where too many animals (including goats) are leading to desertification through overgrazing, so parachuting more goats into the environment could easily cause more harm than good. (To be fair, ActionAid appears aware of these and similar issues, clearly stating that it may substitute your goat for something else – such as, one assumes, essential toiletries – if the local situation were to demand it.) It is also worth remembering that there is a prevalent western bias, driven by a surfeit of plenty, that farming can be a lifestyle choice… and thus a good thing. That is a very different proposition from ‘helping’ someone by forcing them into subsistence farming with a couple of goats in a semi-desert, where starvation lurks for their children – and there is no choice at all.

Four decades of working to mitigate cognitive biases in myself, and those I have led, have taught me the value of this counter-argument technique and of the more advanced cognitive bias mitigation techniques which I discuss as a consultant. However, I occasionally find someone who is trying to trigger so many of my cognitive biases to drive my money their way that I just sit back in appreciation.

ActionAid Sweden’s release for Christmas 2015 of Silent Night (Goat Edition), either by accident or design, is a brilliant example. In case you have not already been exposed to it, take a look at this link:

(I understand that no goats were hurt in the making of this recording…)
Even a year later, and even as a shepherd who is well accustomed to the strange noises which sheep and goats can make, Silent Night (Goat Edition) still makes me smile. I hope it does the same for you.

I wish you all the very best over this Christmas season… and for the year ahead.