A simple test related to cognitive bias is known as the dot-probe task. This tests for an optimistic or pessimistic bias and is available from McGill:
» Dot-Probe demonstration

The Lovallo and Sibony article published by McKinsey, outlining the original classification of the five types of biases surveyed by the CBT, can be found here:
» The case for behavioural strategy 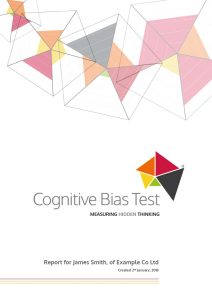 The Harvard Business Review has a series of articles on cognitive biases which can be accessed here:
» The Magazine – HBR