One way of putting cognitive biases into context is to explore the links between personality and behaviour. It is commonly accepted that personality is partly innate, partly formed from experiences and that it drives behaviours consciously and unconsciously.

The ‘Pathways Model’, provides a view, informed by cognitive biases, of the links between personality and behaviour. It borrows from Freud’s useful (but unproven) model of three sections of the mind, and the Pathways Model shows three similar main pathways between personality and behaviour – the conscious (you are aware of it), the preconscious (you can become aware of it, if you direct your attention to it) and the unconscious (extremely difficult to become aware of it). The Pathways Model postulates that all three pathways are influenced by one’s cognitive biases – systematic corruptions in thinking which are remarkably stable and persistent. These cognitive biases affect the way in which information is gathered and analysed. They are insidious, because leaders often think that they are acting rationally, but the corruption in the logic used to reach a decision can lead to some very poor outcomes. 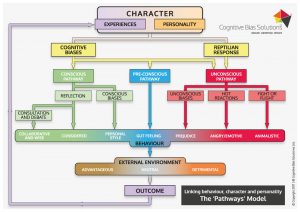 The unconscious pathway is also influenced by the reptilian response. The neurologist Paul MacLean, who supposed that there might be three brains in humans (the reptilian, the limbic and the neo cortex), first described this. In Maclean’s theory, each of these brains represents an evolutionary layer, starting with the reptilian brain. Modern research suggests that Maclean’s three-layer model is overcomplex – for example, the limbic brain is not thought to be a distinct entity, but MacLean’s central concept, that the reptilian brain is concerned with survival and the fight-or-flight response and that the neo-cortex evolved to control the reptilian brain, gives a model which is a simple, fundamental insight into people’s behaviour, particularly when under pressure.

This reptilian response prompts the fight-or-flight response and the hot reactions which are both part of the unconscious pathway in the Pathways Model. These give rise to angry, emotive and even animalistic behaviours. Given that senior leaders in any organisation tend to be judged more on how they react than how they act, this is usually a response which is under good regulation by most senior executives – at least most of the time.

The unconscious pathway includes unconscious biases. These are the product of generalisations leading to micro-inequities or, worse, prejudice. Micro-inequities are a concept coined by Mary Rowe of MIT, in 1973. She described apparently small events, unrecognised by the perpetrator, which signalled inequity – such as the CEO who looks at only one person in the group, when discussing an important decision, or the teacher who smiles at some of his pupils consistently and unswervingly frowns at others.

Prejudice is the bigger cousin of micro-inequities. It may involve not employing (or promoting) someone simply because of their race, gender, sexual orientation or religion. This is clearly wrong and not an error into which most senior executives readily fall. There have been some interesting ways developed by Harvard to test for such biases, known as the Implicit Association Tests (available on the Harvard website).

The second link between personality and behaviour is the preconscious pathway. This is where leaders go with their ‘gut feel’; while senior executives tend to be aware of them, these rapid decisions are heavily influenced by preconscious cognitive biases. These instinctive responses can be very useful in solving tactical issues, but fall down when strategic thinking is required, for reasons explained later.

The other, more difficult, conscious pathway is via reflection, where a sustained effort is made to understand the workings of one’s mind and to generate alternative viewpoints. This requires knowledge of one’s thinking patterns (which include cognitive biases), as well as specific techniques for generating and evaluating alternative perspectives. This route leads to behaviour which is often described as ‘considered’.

Finally, debating the merits of a decision with a diverse, wider group can enhance the ability of individual reflection to reduce cognitive biases. Diversity is key here – one more reason why unconscious biases (which always reduce diversity) must be kept under good regulation. A senior team solely populated by white, heterosexual, older males – the hackneyed stale, male and pale image – is going to struggle to bring the necessary diversity of views to the table to counter cognitive biases – but, arguably, so would a team exclusively made up of younger, black lesbians.

Debating issues with a diverse team is one good approach taken by senior executives, who will often have some form of senior leadership team to assist them with decision-making, among other functions. The problem which arises here is that this senior team members, as they work together over time, develop their own set of shared cognitive biases – these then adversely affect their debates and recommendations.