James was the CEO of a successful company in the secondary sector, manufacturing goods for supply to other companies. James had originally worked in one of the large consulting firms after his MBA, before moving over to industry 15 years ago. He was known as a smart, charismatic leader with an excellent reputation for getting things done.

James, however, had a problem.  On two occasions his competitors had stolen a march on his company – once through technology, once through spotting an emerging change in the political landscape and exploiting it. James was concerned that despite having a highly engaged and diverse senior leadership team, they were missing emerging strategic opportunities. James discussed the issue with his head of HR, Herbert. Herbert had read about the issue of cognitive biases and their effects on strategic thinking and suggested that they hire a consultant to run the team through a Cognitive Bias Survey. 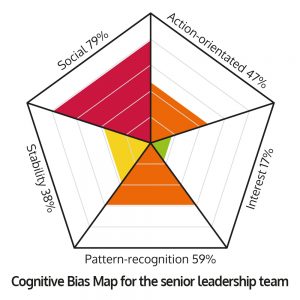 The survey produced the individual cognitive bias maps for each executive and these showed a wide range of biases with action-orientated biases being the most prevalent amongst them. The survey also revealed strong social biases when the team worked together as a group, but not when they were working individually in their own departments.

During the workshop, the team worked on concrete measures to help overcome their action-orientated biases, and to help watch for them in each other. These biases corrupt strategic awareness as the urge to take immediate action can cloud thoughtful analysis of potential future trends. The workshop then moved on to consider the group’s biases. The strong social biases they exhibited as a group reflected James’ charismatic leadership. They realised that their sessions together were enjoyable and fun, but that they rarely challenged either the explicit or the implicit strategic direction set by James. Worse still, they realised that they tended to try and guess ‘what James would like’, based on their past experience of working with him, and then put that forward in their meetings. This was being driven by their moderately strong pattern-recognition biases when working as a group.

The team then put together agreed actions to ensure that their debates were clearly separated from their discussions, that discussions would be more robust and that opposing views would be submitted for debate. James reported that the changes in the way that the team debated and discussed strategic issues after the workshop was striking. Debates were much more hard edged, and problems or opportunities with new ideas were quickly rising to the surface in discussions. James had also realised that he needed to modify his own behaviour in senior leadership meetings so that social biases would be minimised.