Ramesh, the CEO of a medium to large enterprise in the primary sector, had led his business from a start-up he and his brother had founded to one with 25,000 employees and a turnover of $2Bn operating in 5 countries. His focus now was to put the company in good shape prior to listing on the stock exchange.

The senior leadership team consisted of a mix of sons and daughters of the 2 founders and professionals brought in from outside. There was good ethnic diversity in the team, with women representing nearly 40% of the team. The company was profitable, but the future strategy was unclear.

Ramesh asked his head of HR, Jane, to source a consultant to help the team focus and align on a coherent strategy for the medium to long term. Having scoped the project, the consultant recommended that the cognitive biases of the team and the individuals were surveyed. 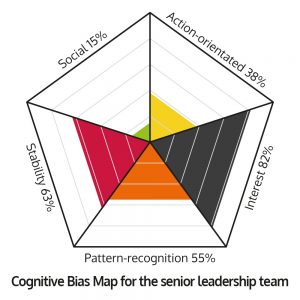 All members of the team took a Cognitive Bias Test. When this was presented to the team in a workshop, engagement from the senior leadership team members was immediately very high. Once they had understood their own biases and those of their colleagues, they were able to see that interest biases were strongly affecting their discussions, making them interesting but not fruitful. As they discussed where these biases came from, they realised that the silo structure of the organisation, coupled with the fact that several members of the team had outside commercial interests, was driving a diverse approach to the strategy which was becoming destructive.

During the workshop the team discussed the issue and developed strategies to mitigate their biases, both individually and when acting as a team.  Within 3 months, Ramesh noted that the quality of debates had improved, with plenty of diverse views, but a much greater willingness of the team to move to a conclusion. Ramesh was also happy to admit that some of his own biases, which had excessively anchored him to defend some legacy projects, had also been hindering the team. This bias had been mirrored by the leadership team, and was reflected in strong stability biases when they were working as a group, although most of the team did not have high stability bases in their individual cognitive bias maps. This realisation that their biases were different when they acted as a team, and the subsequent discussions on developing concrete ways of dealing with this had a profound effect on the group dynamics in the workshop.

Ramesh had found that the techniques discussed in the workshop for uncovering biases, and the atmosphere created – where team members were all comfortable about talking about their biases and seeking help to mitigate them – had unblocked the team’s thinking and allowed strategy to become as decisive as the company’s operations had always been.