Alan, was the CEO of a large multi-national company operating in the tertiary sector. His senior leadership team was made up of some very long serving executives, and some new arrivals who had join following M&A and organic expansion. Alan was concerned that the strategic discussions in the group had become stale and that the company was beginning to drift. He discussed the issue with Jim, one of the board members who also sat on the leadership team. Jim had read about the issue of cognitive biases in a McKinsey article, and was interested to see whether there was any way of measuring these biases, deciding whether they were affecting the group’s strategic thinking and, if so, mitigating them.

Alan and Jim discussed the issue with Julie, the Head of HR, who had contacts in other companies who had been through similar issues. She recommended a Cognitive Bias Test for the senior leadership team. 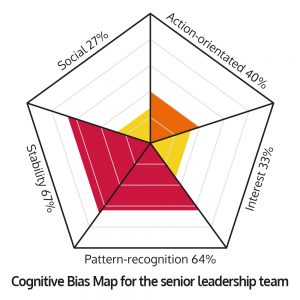 The test showed that most of the executives had strong pattern-recognition biases, and that these were coupled with stability biases when they worked together as a group. A one-day workshop was arranged with all of the senior leadership team present to look at the issue. The team was large, so the consultants split them into three groups to work on the issues identified in the report. By the end of the day, all executives had identified what steps they needed to take to mitigate their own biases, and proposed new ways of working together to mitigate the team’s biases.

The following day the group spent an ‘away day’ working on the strategic opportunities and challenges facing the company. Alan was surprised by the outcome of using the techniques discussed in the cognitive bias workshop. By changing the way that the team worked, including the approach of splitting into smaller groups and looking at the same issue simultaneously before reporting back to each other, the quality of proposals that were fed into the debate were vastly improved. He found that executives on his senior leadership team were articulating their biases at the beginning of debates and discussions, and explaining what past events had led to the formation of those biases. Alan confessed that, despite having known and worked with most of these executives for years, he was unaware of many of these formative experiences. This simple technique had the effect of unlocking discussions, and injecting energy into them.

Jim also realised that the somewhat paternalistic management style that the company had developed over the years had reinforced the stability biases which were evident when they worked as a group. As a result of the workshop, he was able to work with Julie to devise better ways of rewarding long serving executives (for example by the use of sabbaticals which broadened and freshened their perspective), so that both pattern-recognition biases and stability biases could be further mitigated.